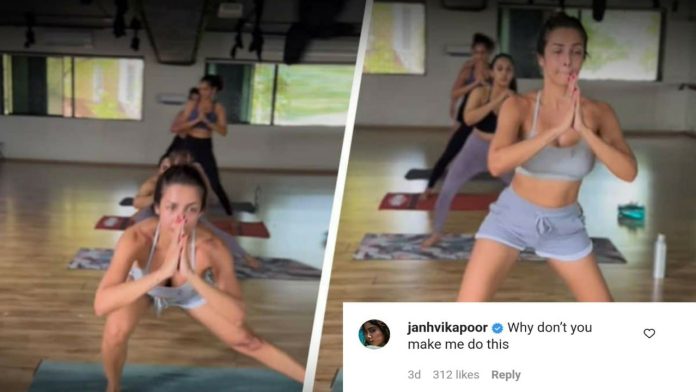 Working out is enjoyable. However, bringing your friends to the gym makes the entire experience more enjoyable and exciting. A throwback video of Malaika Arora, who is currently recovering from an accident, demonstrates this point. The actress and her fellow yoginis hit the yoga studio for a rigorous and energetic full-body workout, inspiring us to get our yoga mats out. Malaika’s yoga partners during the training session were Akansha Ranjan Kapoor, Kubbra Sait, and Nidhi Singh. Janhvi Kapoor even responded amusingly to the video.

Sarvesh Shashi, Malaika Arora’s trainer and yoga partner, posted her video on his Instagram page on Friday with the caption, “#flashbackfriday to these amazing yoginis. Everyone has a wonderful weekend.” The video shows Malaika and the other stars performing Skandasana, also known as the Side Lunge Pose in yoga. Scroll down to watch the video.

Malaika and her fellow yoginis performed the Side Lunge pose, also known as Skandasana, by standing upright with a straight spine and parted legs. They then moved their bodies to one side, folding one leg at the knee and stretching the other, hands joined in a namaste pose. This was followed by the ladies standing straight with one leg slightly raised in the air.

Malaika’s video received a lot of likes and comments from viewers, including celebrities like Janhvi Kapoor, who had an amusing reaction to it. “Why don’t you make me do this?” she wrote.

Benefits of Side Lunges or Skandasana:

Side lunges, also known as Skandasana, stretch the hamstrings and hip adductors while also strengthening the core, improving balance, and increasing flexibility. It shapes and tones the outer thighs, burns fat, strengthens the back, works the quadriceps, and strengthens the glutes.

Will Eating At Night Make You Fat?

2022 Will Be All About Mental Fitness

Shipla Shetty and her Yoga Moves!

8 Yoga Asanas That Can Aid With Anxiety- Children Friendly Edition

KL Rahul Abides By Pilates For Healing After An Injury