Bhagyashree Patwardhan, an Indian starlet who is enthusiastic about her son Abhimanyu’s debut on the silver screen with Nikamma, is an ageless beauty who looks vibrant at the age of 53. Every Tuesday, she uses the hashtag #tuesdaytipswithb to showcase her love of Indian food on Instagram. Look at the Indian foods she swears by. 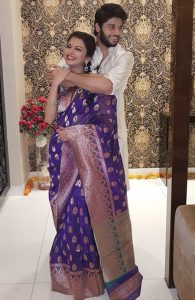 This leafy green, also known as Laal Saag, is high in vitamins and minerals. Bhagyashree prepares it in an iron kadhai and serves it with rajgira or jowar ki roti and a little jaggery (gud).

When she is fasting, she enjoys Sabudana Khichdi with green chilli and peanuts. On busy days, she also eats it as a mid-day snack.

Bhagyashree recommends eating pumpkin in the form of soup, curry, or even dessert because it is high in vitamin A, beta-carotene, and zinc.

This fruit contains phytoestrogens, which help reduce hot flashes and night sweats, according to Bhagyashree. It also contains antioxidants for your skin and fibre, which aids in cholesterol reduction and insulin regulation.

To keep her skin flawless, she swears by banana peel as a scrub. It contains silica and phenolic acids, which boost collagen production while reducing pigmentation and acne scars.

She also enjoys green peas in the form of a snack, paratha, or soup during the season because they are high in protein, vitamin A, C, E, potassium, and zinc.

She roasts it and season it with salt, black pepper, black salt, lemon juice, and chaat masala to make it a healthy snack.

During the summer, she enjoys curd because it is high in protein and vitamin D. It also increases serotonin levels in the body.

Previous articleSlim, Chubby, Curvy? No Matter What Body Type You Have, Pilates Are For You!
Next articleYoga Keeps You From Thyroid Diseases- Let Us See How!