On the surface, it appears to be a sound idea: with most muscles, you want to flex and contract them through a specific range of motion. You can never have enough core stability if you’re a serious lifter hoisting barbells off the ground and over your head. Here are Planks ideas to switch up things a bit-

Plank on an Incline

Like the incline push-up, the incline plank is a scaled-down version of the original. It requires less stability and emphasises your abs’ middle muscles. You’re supporting less body weight because of the incline. That means you’ll be able to strengthen your core if you can’t hold a regular front plank for 30 seconds or more.

The decline plank stresses your lower abs more than the rest of your “six-pack” muscles. Because your lower abs are frequently neglected, and the decline puts more strain on your shoulders, this “beginner” front plank exercise can be surprisingly difficult to maintain.

This isn’t your typical front plank. It is accessible to people who have mastered front planks because it physically requires the same position — but it significantly raises the stakes. The RKC plank transforms this into a total-body challenge from head to toe by creating tension between your upper and lower body. Maintaining this version of the plank for more than 10 seconds requires your complete focus.

The plank plus is another name for the weighted plank. When the standard front plank and its variations are no longer challenging you, placing the weight directly over your core will undoubtedly up the ante.

Plank on the Side 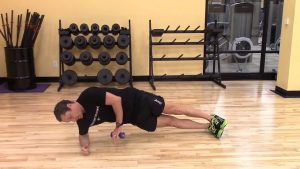 Side planks are an exercise that everyone despises, but the benefits are undeniable. They work almost every muscle in your body, from head to toe, including your lower back. To keep your spine neutral, the lower back muscles that surround it will contract isometrically. Because gravity isn’t directly acting on your spine, this is an excellent exercise for strengthening the lower back if you’re suffering from lower back pain.

Because of the rotational component of this side plank variation, this exercise is both static and dynamic. This strengthens your obliques even more, which is useful for maintaining anti-rotational strength during heavy lifts. Because your weight is rolling forward, you are simultaneously training isometric, concentric, and eccentric contractions.

Previous article
Kareena Kapoor Khan Flaunts Her Post-Yoga Facial Glow; Learn About Its Skin-Health Benefits
Next article
As Work-From-Home Is Becoming More Popular, Here Are Some Health Tips To Help You Stay Fit

Breaking down 14 of the greatest stretches for sciatica pain relief