Who Is Chetna Sharma Who Is Taking Arm Wrestling To The Pro Level?

Chetna Sharma, the 65 Kg women’s champion of the Pro Panja League, grew up in Guwahati, Assam, and was always interested in sports because her family was full of athletes. She thrived in the high jump, long jump, and running races during her school years. She was frequently named the best athlete in her school. However, the concept of arm wrestling did not occur to her until much later in life.

Her partner, Nayan Jyoti Bora, a passionate arm wrestler and fitness trainer, motivated her to pursue arm wrestling as a sport. She was apprehensive at first. She had the perception that it was something men did just to show off at any casual get together or party.

But her husband persuaded her to take things literally. He could harness the significance in her arms because he had been an arm wrestler for many years and thought she would be great at this sport. She competed in her first arm-wrestling competition in 2011 but did not win. She had met with little success for two years and did suffer injuries as a result of her hardships.

She was oblivious that arm wrestling, like all other sports, requires the mastery of strategies and tricks. Chetna eventually thought about giving up because she felt she would never be able to perfect this sport. Her husband, however, swayed her to recommence. She achieved her first victory after two years of struggle and hard work when she won the Assam state championship in 2013. That victory inspired her, and she resolved to devote more time and effort to her sport.

But first, she needed to finish her master’s degree. So she went on a sabbatical and focused on her studies. She was intelligent enough to understand that if she wanted to succeed in life, she needed to maintain her academic pursuits as well. She returned to Assam Engineering College after completing her MCA.

Viewing her headway, her male contenders aimed to psychologically paralyze her. They mocked her efforts and mocked her for participating in a sport dominated by men. But she completely dismissed the taunts and continued her work. She started lifting weights on a regular basis to gain strength. She also ate a high protein diet and quickly gained arm strength. She exercised her forearms, biceps, triceps, back, and wrist. She also did heavy barbell deadlifts, biceps curls, and pull-ups, as most arm wrestlers do.

The otherwise mild-mannered woman would become fierce and confrontational while wrestling. Because of her attacking tactic and belligerence, the men who had previously mocked her began to honor her skill. Chetna won the Pro Panja League in Delhi in 2020 and the Super-match title in the Pro Panja League championship in Goa in 2021.

She is inclined to keep ruling the roost in India with her strong arms and fervent perseverance to thwart all contenders, men or women. Here are some highlights from Chetna Sharma’s life that may be of great interest to you. But before that, you should read about the climax of the eventful event at IIT. She was the icon of the twilight when India’s premier arm-wrestling contest landed at IIT Bombay’s Sports Fest ‘Aavhan’. In collaboration with the engineering organisation, Pro Panja League, which is affiliated with the Indian Arm Wrestling Federation, arranged a distinctive challenge at the jamboree in which students had the incentive to arm wrestle Chetna Sharma, the six-time national champion.

Over 100 students competed, with Sachin Sonage, Luvkush, Aryan, and Manish completing as the top four male subjects and garnering the capacity to shine against Chetna Sharma for a 10,000 cash prize. Chetna’s opponents could barely move his hands, and the Assam arm wrestler easily won each match. She was later challenged by Almaas Unnu Salna, the finalist among the female competitors, but she met the same fate as her male counterparts.

An Insight With Chetna Sharma-

How do you maintain your weight category?

I competed in the under 65 category in the National Championship and the Pro Panja League. My physical weight varies between 61,62, and 63 kg. Regardless of my diet, workouts, or routines, it has never risen beyond 65. To stay in my weight category, I don’t have to follow any rigorous regulations. It is self-sustaining.

Have you been competing in the weight division since you first joined?

Yes, I competed in the under 65 kg division at the Pro Panja ranking tournament in Delhi. My weight at the time was the same as it is now, so I intend to compete in the same category even in Gwalior for the upcoming tournament.

My weight fluctuated about 63 kgs during Nationals. As a result, I had to go on diets to get my weight down below 60 kilos. Since 2019, I’ve resolved not to diet and to eat as much as I want. Since then, I’ve only competed in the 65 kg weight class.

What part do core and leg strength play in this arm strength game?

Strong legs balance our bodies. Work on quadriceps, glutes, and hamstrings on a regular basis to keep your legs strong. Leg strengthening exercises include deadlifts, squats, and lunges. “Har cheez ki buniyaad achhi honi chahiye” (Foundation for everything should be solid). If your legs are your base, and you don’t have a strong base, you’re probably not going to be good at arm wrestling. 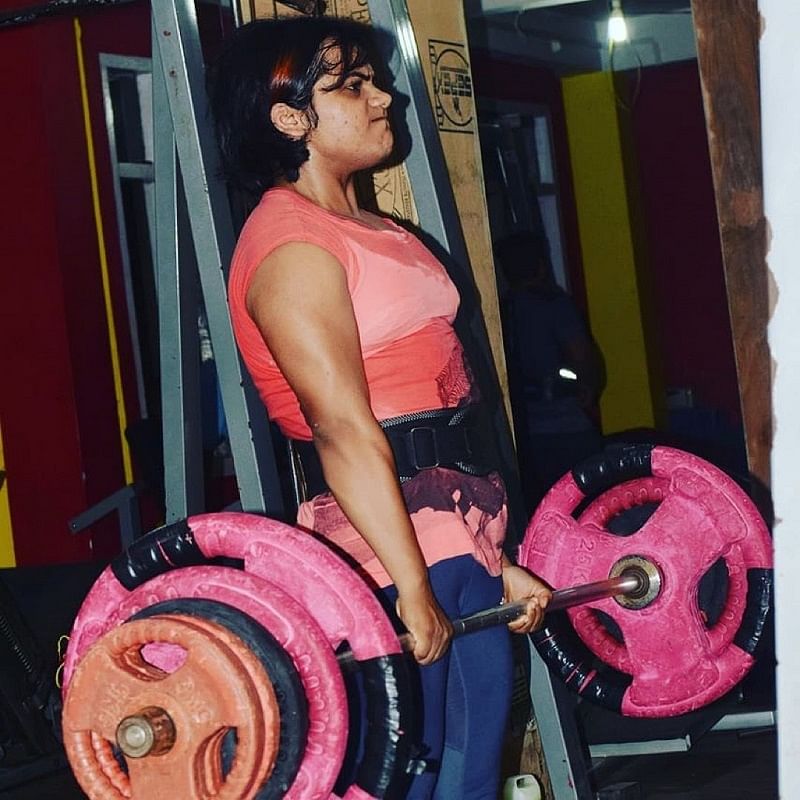 What exercises do you take to strengthen your arms, core, and legs?

As a Panja athlete, do you engage in regular or specific workouts?

I exercise on a regular basis. I don’t train out with arm wrestling in mind. I work out for my entire body. I work out my legs, glutes, calves, hamstrings, and other muscles. I work out four days a week.

I go to two arm-wrestling sessions a week at the gym and one table session on a regular basis.

Do you exercise with men? If so, what difference does it make?

I only work out with dudes. I regularly work out with my husband. If I had worked out with a woman and lifted more than she did, I would have become comfortable and developed superiority complexes, halting my growth. Because men are biologically stronger than women, I strive to raise their aim. This inspired me to want to be greater and stronger than other ladies. Working out alongside men makes a significant difference.